Random thoughts from this Christmas Break 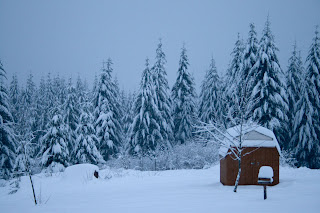 (view from parent's back porch on Dec 23rd)

Here's some thoughts I had while staying at my parent's place over Christmas Break:

Ever stop to think about the comforts we have compared to our ancestors? Compare your life to that of a King in Medieval times. Obviously we don't have the same control over others (try telling a bunch of people to wage war in your name) But besides that, here's a vastly incomplete list of what we have. Everyone's mileage will vary but you get the gist:
OK, I went off the deep end on that tangent.

My Vacation in Colton so Far

Here's my inspirational photo for the day: 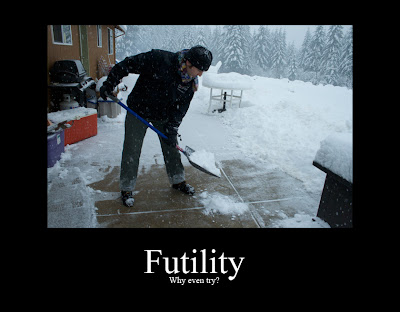 By the time I got to the end of the walkway, the beginning was already snowed over.
Posted by TMC at 2:15 PM

How NOT to make a Blog Banner

My Quote! Mine! Mine!

New quote of mine. I couldn't find it anywhere else on the internet. Is it possible I'm the first person to put these words together in the same order? I sincerely doubt it:


"Boredom is merely a symptom of a poor imagination"
Posted by TMC at 9:49 PM

The Bus-Cycle. I'm not the first one to think of it.

I was taking the bus home this evening, and reading a copy of Men's Health (because Obama was on the cover & we thought it'd be a neat souvenir. I'm not a health nut, I swear). I realized that I don't exercise enough, mostly because it's not part of my schedule. And I spend a lot of time on the bus, when I could be exercising. Since we've got a lot of hybrid buses in Seattle, is there any way to help charge them with human power? It probably wouldn't help much, but I certainly would like the excuse to exercise more.

When I got home, I remembered that when I was 6 or 7 I already had the idea of a human powered car with bike pedals (maybe my inspiration was from the Flintstones).

Turns out others have made my childhood musings a reality. It doesn't go that fast, but it does work. Check out the Busycle. The video is a bit overly long, and reminds me why I find some more earthy types a bit annoying, but their heart is in the right place.

More modern and less hippy, a bus in Brazil. (also in Portuguese?. Check out "Imagens" for pictures):Corpus Super Bike
Just beware of the Flash based lens flare. Double Foul!

I think the two most obvious questions about making something like this a reality is this:

1: How much more space would be taken up (how many less passengers could you fit on a bus like this).
2: Could it be built so they could hose off the areas when done, lest the stench of many make it unbearable?
Posted by TMC at 11:10 PM

Labels: Inventions to be Made

Shazam, but for Movies & TV Shows

You've probably heard about Shazam by now. No, not the comic book, and certainly not Sha Na Na (why did I always think they were related? their outfits?), the new app for iPhones and Android phones and other stuff, that enables them to identify songs being played over the radio. Not only that, but it then gives you band and album info, and enables you to download the song right then. I have waited my whole life for this, and I don't even own an iPhone!

But, I really want the same/similar thing for movies and TV shows. Particularly for things on cable. There's a ton of movies and shows that I caught the last half of, and for whatever reason, don't get the name of the show. This is especially true in the mid to late 80s, before the TV guide channels were interactive.

So, I should be able to go onto IMDb or Google, and type in a few lines about the plot, an estimated release date, any known actors, etc, and get a narrowed down list of potential movies.

Here's one that I'd really like to know about, tell me the name if you know it:

And old couple are leaving their house for the summer, to be house sat by a family (Mom, Dad, Daughter, and Grandma). At the beginning, you see photos of others who have house sat on a table. Over the course of the summer, all sorts of bad things happen to the people, and they eventually realize that the place is evil, nasty and haunted. At the very end, when they decide to leave, the wife forgets something and goes back in to get it (typical horror plot device, where I always yell to the TV "DON'T DO IT!!"). When she doesn't return, the man goes back in after her. He goes to the top floor, and finds her appearing to be dressed up like an old lady in a rocking chair. Somehow he gets out of there, but when he's outside, bricks from the chimney fall & kill him. The ending shows the return of the old couple, and they add a new photo to their table of previous house sitters.
Posted by TMC at 12:20 AM

Labels: Inventions to be Made, Movies/TV

I was at Costco yesterday, and noticed a strange pattern. In the book & DVD section, everything there that I was interested was just repackaged & complete/extended/special edition of things from my childhood. Calvin & Hobbes, Dilbert, All the Peanuts , Ruldolph & Frosty Christmas specials. Every MASH episode & the original movie, Get Smart (so not just my childhood, my parent's early adulthood too). If Grandpa was still alive, he could finally understand every possible reason behind the war that he survived.

This stuff is all on my Amazon wishlist, but I think there's something inherently insidious and distracting about all of it. Will my path to greater understanding and potential enlightenment be derailed by the continual consumerization of my past?

Do any of these products enable me to relive my past? And even if it did, doesn't that mean I'm no longer living in the present? No longer connected to my family and my daughter's development? And speaking of her, what will she be nostalgic for when she gets older? Her first iPhone?

Frank Zappa once said that the world will end not from any war, but from nostalgia. People will take two steps, miss the first one and be immobilized until they die.
Posted by TMC at 3:26 PM

What Happened to Elemental Motion???

Does it look like your favorite outdated Motion Capture & Motion Graphics website has been hijacked by some random note writing fool? Not to worry, the old site still exists.

I've been meaning for some time now to switch this domain over to a personal, non-work related site. Tonight seemed like a good time.

If you came to this blog via www.troymcfarland.com, you may have been looking for my old (and now defunct) business website, Elemental Motion. It can still be found at www.elementalmotion.com

And, you can find my video work at www.youtube.com/tmc27. I might even add a Vimeo page one day soon.

Welcome to my new blog, a place to write down random ideas & predictions. Feel free to steal ideas and make millions! (Just kidding. Seriously, if you want to run with an idea, please at least contact first, k?)

A little late as in, the deadline was October 20th. I'm referring to the contest that Google is sponsoring, project10tothe100.com

Anyway, I had an idea that I sent their way. It's probably already been done, but if not, I would think that the good folks at Google could develop it pretty quickly. The idea is below.


Hi,
I know the contest is over, but sometimes ideas don't fall within deadlines. Also, since it's over I don't expect to be even entered in the contest, but just wanted to share an idea with you.

I know that websites exist to rate charities (such as http://www.charitynavigator.org/), but are there any sites or systems put in place to enable charities to work together more effectively?

I think that if there was an open, free & easy to use way non-profits, charities and other service organizations to work together, that everyone would benefit. There would be less repeated effort. More established groups could help mentor new groups, helping them avoid the pitfalls they faced.

I hope that other people have thought of this and are working on a solution, but if not, just thought I'd share it.

Thank you for your time,
Troy McFarland
Posted by TMC at 8:54 PM

Labels: Inventions to be Made
Newer Posts Home
Subscribe to: Posts (Atom)