Is our government really getting bigger?

Another idea I had recently, but haven't had the time to check the facts & make neat graphs:

I keep hearing from politically conservative & libertarian friends that the main goal of government is to grow itself. These friends of mine to to reduce government interference, as well as the actual headcount of government employees.

I am very certain that the headcount of government employees has grown since the inception of our great union. But, how has it grown per capita? For those folks who think I just made some words up, per capita means 'per unit of population'.

I'd like to make a graph of government employee head count over time, along with US population figures, and a per capita number derived. I'd also like this graph to point out any historical points of interests for a particular jump or drop in the per capita figure. Why? What happened? Who was president? Was a new department created? What was the result (did it make America a better place to live for it's citizens or worse?) That sort of thing.

All this requires time, research, and energy. That's why I'm posting it here. If anyone wants to do this before I get around to it, please be my guest! Just send me a link.

Labels: Inventions to be Made, politics 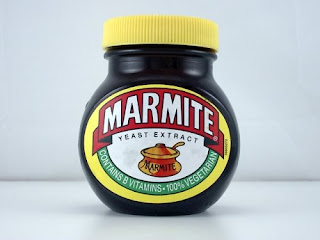 There once was a gaping hole in my culinary life. It has now been filled. With Marmite. For those who haven't tried it, it can be best described as "Salty spreadable vegetable bouillon" What's not to love? Except for the bitter aftertaste, if you eat it on its own or don't spread it thinly enough.

This is what your tastebuds think they are going to experience after eating about a pound of poutine. But the poutine never quite delivers, does it?

I've had this stuff on toast (it goes great with almond butter on top), on burritos, and today, even on top of pizza. That was a bit much. That's like taking weapons grade plutonium & saying "Hey, let's mix in a little Led Zeppelin." Not safe. For your eardrums or the remaining living members of the band.

If you haven't tried it yet, go get some now.

Now then, anyone in Seattle have a good line on where I could try some vegemite?

Image courtesy of FreeDigitalPhotos.net
Posted by TMC at 12:38 AM