My cross to bear

At the last minute, I decided to spruce up our house for Halloween. The lasagna gardening patch that Alyssa is working on reminded me of freshly buried bodies, so why not a cemetery? I then waited a few days, as I was feeling pretty sick (still am today, but better), and went out on the town to buy some fake gravestones. I got the last one at Target on the 30th ($5), and then headed over to Display & Costume to pick up a few more. Talk about busy!! They had a parking attendant directing traffic! Their styrofoam gravestones were $20, so I opted for two of their $3.75 ones (pictured below) 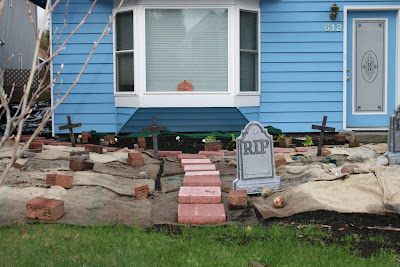 As we were still short on graves, I made some iron crosses to practice my welds. Best weld is pictured below. If I didn't botch the end with the extra MIG wire it would have been darn near perfect. 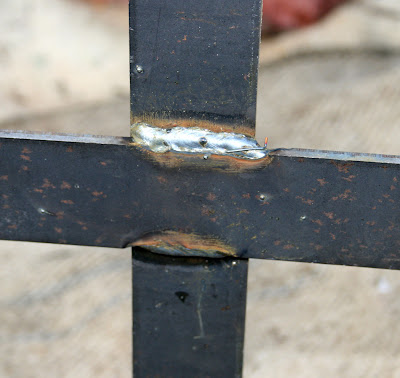 I then hid some LED lights behind bricks & aimed them at the crosses.

Alyssa had just bought an LED candle holder, which I placed in front of her creepy painting. The height was perfect for the lamp!

We closed the curtains, and back lit them with 25 watt florescent lights that I put in the flood lamps I usually use to take Art From Scratch pictures with. I covered them with red gel filters.

At night, it actually looked somewhat impressive! The way the colors came out on this photo remind me of Tim Burton's style :)

Yes, I did some Photoshop work, but not too much. I used a tripod & shot 3 images at different exposure settings, then blended them together for the best lighting. Otherwise, the door & windows would have been blown out. I also gave it a slight vignette at the edges to highlight the center more. Click on all images for enlargements! 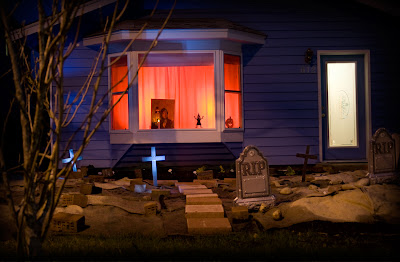 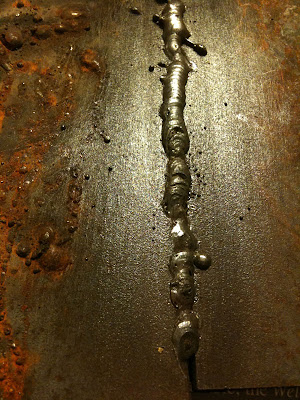 I bought a used MIG welder from my friend over the weekend & finally had the time to try it out. This is the first weld that I tried on it, trying to set the wire speed, etc... Not too bad considering it's been at least 5 years since I've used a MIG, the metal was really dirty, and my clamp wasn't the right one for the job. 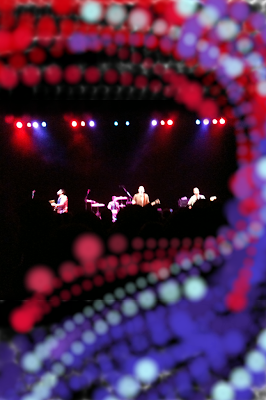 Alyssa & I just got back from the Sunny Day Real Estate concert. They started their set right on time!!! They didn't make us wait too long!!! If for no other reason, this band was teh awesome!!

She thought I'd mess with their name like I did with My Bloody Valentine, but the only thing I could think of was "Suni Gay Trill Relate", and that neither makes sense nor describes the event accurately.

I'd never heard really their music before, except when they were wafting from her speakers in the house. So, every song was pretty much new for me. After the show I found out that they started playing in 1994. That explains why all the young kids there were cool with these guys looking older than me. I love it when you can have a bald lead singer, and he's still hip.

About the music:
I liked most of it, even if it there wasn't as much variety between the songs as I would have liked. Within each song, there were wonderful dynamics... but each song, even their ballads followed the same structure.

They were incredibly tight. Like James Brown backup musician tight.

The lead singer reminded me of my late great uncle Larry, with overly broad shoulders, a very slight hunch, and a solid colored T-shirt that hung too far from his neck. So, I kind of expected him to be leaning over egg salad and playing cards with my family at a reunion. But he sang instead.

Their guitarist reminded me of a very happy go lucky guitar playing roommate of mine in Eugene. This one was a bit more spastic. His face held much more contrast on stage than the other players.

The Venue:
The Paramount just put their new sign up, but didn't turn on the lights. I think they're holding out to raise $150,000 before they do. Hey, the old sign used to cost them $25k a year in electric bills. If they wait 6 years before turning it on, it will have paid for itself ;-)

There was a club near the restrooms, astonishingly called "The Paramount Club" We walked in and were stopped. We were told rather snobbily that it was a private club. I was not impressed. It was mostly empty.

The interior was exquisite, of course. I kept looking at the gold leaf on the walls. Textures everywhere! The sound was incredible where we stood. (Center orchestra pit general admission, about 15 people from the front of the stage)

Where we were standing, the place smelled like Diamond Dry, (ground up corn cobs for those not in the know).
I'm guessing that was from all the rain tracked onto the old floor. Or possibly from the guy next to me.

It was really hot and humid in there, and on occasion we'd get a light wafting of cool air from the ceiling. I wish we had that the entire time, instead of every five minutes.

The crowd was mostly younger than us, I'd say just post college age.

They went out of their way to dress down and uglify themselves. All ill-fitting earth colors too warm for the venue, eyebrow rings, thick rimmed glassed. I felt like I took a time machine back to the beginning of the grunge movement. But everyone was very nice.

There was a couple in front of us, and the girl was obviously into the music and her date a lot more than he was into them or her. She was filled with nervous energy, and kept scratching his back to the music. We also noticed that she liked rubbing his butt. To the right of us was a shorter couple. The girl next to me kept trying to crowd me out, and it took until about mid show for me to realize that it was so she could get a better view. Every time I go to a general Admission show, I dream of having everyone line up from short to tall, with the tall people in the back so everyone can see. That's how it'd work if we had a *real* fascist in office!! (So quit complaining folks)

Like everyone else there with an 'eye'Phone, I felt obliged to snag a couple shots of the band. But I didn't. Take any photos. I just happened to find one on the internet when I came home tonight. Of the same show. I took one of the shots into Sketchbook Mobile tonight. Since it doesn't handle horizontal shots well yet, I had a lot of extra canvas to play with. Behold it's glory.
Posted by TMC at 12:36 AM

A Head of it's Time

I just read the wiki about a TV show in the 60's that only aired one episode "Turn On".

Is it just me, or does this sound similar to a fast paced Monty Python mixed with MTV to you?

Anyone know where to find a copy of the actual episode?

I haven't done any metal work for quite some time. One of the big reasons is that I've been waiting to get some of my welding gear back from a friend who lost it in his overcrowded basement. (Yes, I'd still like it back, thanks)

I finally gave up and bought a new pair of oxy welding goggles. I took a close up of the metal's discoloration after I made a really large weld.

The bar was salvaged from the Freemont transfer station, languished in my garage for a few years, then had it's nasty rust knocked off with a grinder about a week ago. I then welded a bunch of stuff to it (The weld was about 2 inches from the discoloration). I absolutely love weld discoloration. It's like God's extra rainbows of love for people forced to breathe metal fumes all day.

Below is the unedited photo: 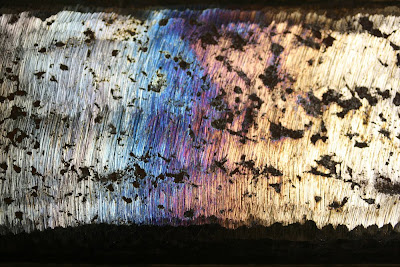 What I did while my wife was on Vacation in Delaware 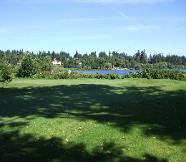 (Picture from Ballinger Lake Golf Course... where I didn't go, but wish I had!)

I don't usually blog during when one of us are on vacation, due to my paranoia about the whole world knowing when the house is vacant most of the day. So, now that it's been several weeks, here's the sordid details of my bachelor shenanigans while the girls were out of the house.

Saturday 29th:
I drove down to the airport to drop them off at 9AM
At 10 AM I was back up in Seattle, at my Lodge's special meeting to confer EA degrees on some new brothers.
Then I drove back down the highway again to Olympia to meet my friends Jason & Heather and Alex & Amanda, and Jason's two friends. We went to the Chehalis Garlic festival later in the day. I got home around 11PM, and although I *was* planning on going to a party held by one of my Lodge Brothers, I thought being able to drive home safely took priority (sleep deprivation!! I don't drink that much!!)

Sunday 30th:
I woke up at 5AM, and picked up Brothers Yuri & Coe to go to Roots to help cook breakfast for 25 homeless youth. We were there from 6AM - 8:30AM. We got our own breakfast afterwards, and then I went home and took a nap. Later in the day, Yuri & I went to the driving range. It was his first time ever to try golfing. He chipped a shot into the hole on the putting green on his first try!

Monday the 31st:
I was at work until really late. Depressing to go back to work while the wife was out enjoying herself :(

Fast forward to Thursday:
After work I walked part of Bellevue's Golf course, to get ready for the upcoming company tournament. My body thanked me for the exercise. Ever get that great feeling after working out?

Friday the 4th:
I took work off & spent some time at PAX. There I met Tejeev Kohli, one of the creators of "Tag: the Power of Paint" . I also saw Gabe & Tycho give a Q&A session, which is always the best part of PAX for me. Because there was a break out of Swine Flu in an Eastern Washington University, I was super paranoid, and washed my hands a lot. Later in the week it turned out that a LOT of people got Swine Flu at PAX, but not me (here's hoping I continue to avoid it)


Saturday 5th:
I went golfing at Bellevue Golf Course with my neighbors, Rick & Denise, and played the front 9. I then came home & did some additional cleanup and then picked up Alyssa & Ravenna at the airport.

It was a great week apart, but I really missed them:)