The Prestige: A really late review

Two of my friends host weekly dinner & movie parties.  Yesterday's was "The Prestige" I loved it, and we all had a great talk afterwards about certain parts of the film.  MASSIVE SPOILERS BELOW.

The Movie Itself:
The multiple story lines at different points in time were reminiscentof LOST & Pulp Fiction.  I liked how the Olivia betrayal scene was shot twice, once for each memoir.  Seeing that it was the same director for "Memento" makes sense.

During some points of the movie, I'd almost confuse "The Professor" with "The Great Danton".  This was for several reasons.
1) They were often in disguise.
2) They became a single unit when they locked in as rivals.  It reminded me a lot of Ridley Scott's "The Duelists" The advantage of that film, however, was that the two leads looked very unique in relation to each
other.
3) They seldom *felt* like the actor that portrayed these characters. Very little Batman or Wolverine in them.  In fact, the director went to great lengths to make nearly everyone in the movie appear foreign to the essence of the actors playing the parts.  Bowie was portrayed as short, even more restrained, and curt.  Very staccato.  Andy Serkis acted neither like a cat with a peanut stuck in his throat, or an enormous ape.  Instead, he played a much more garish character; that of a loud and gaudy American.

Huge Freaking Plot Hole:
"What knot did you tie?"
"I don't remember"

Seriously?  OK, I can buy that, with the guilt and panic and all.  But did anyone ever *look* at her hands from the time they broke her out of the water to the time they buried her?  That would clue you in about the knot methinks.  Even if it was halfway undone, I would think one could figure out what it used to be pretty easily.

Post Movie Ponderings aka Beyond Clone Killing Dilemmas:
If Tesla built this machine that *freaking* cloned anything inside of it, why wasn't it put to much better use?
I'm no Tesla, but here's just a FEW of the things I came up with that you could do with such a machine:
1) Replicate gold.  Instant funding!!!  Hmm, I wonder if you can make a copy of a copy.  1 gold bar =  2 gold bars = 4 gold bars = 8 gold bars.  Even if you couldn't make a copy of a copy, you still could generate limitless gold, just slower.
2) Replicate hard to manufacture items.  Like the Mona Lisa.
3) Replicate Tesla.  Imagine a room full of Teslas, working together on a project.  Besides the need for a little more money to house and feed them, think of how much more work they could accomplish.  First invention they could work on: A safe form of suspended animation for humans.  Teslas throughout the ages!  And, it would also be a handy way to ensure that they don't get on each other's nerves.

So, it worked well as plot moving device, provided you didn't put any post movie thought into it.

Drafting Table Before & After

I've had my uncle's drafting table since middle school (I think... certainly since high-school)  It has the uncany ability to be a Class-A shit collector.  I finally got around to cleaning it last weekend.

Here's the before & after shots.  1 week later, and it still looks the same :) 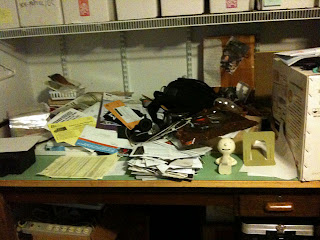 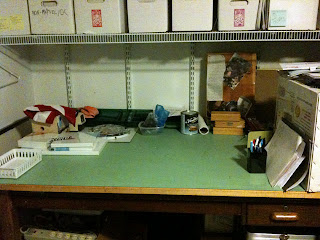