I just put the (as far as I can tell) finishing touches on my welding table today. 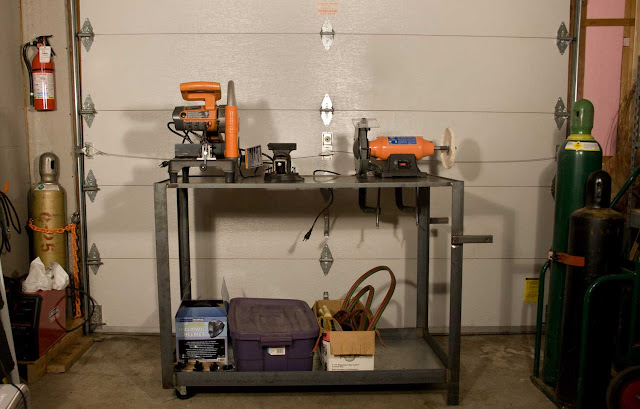 Yesterday, I added two handles, to make it easier to move around.  Here is the best weld from them: 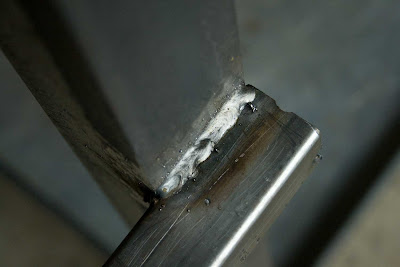 Still a lot of room to improve.  But I feel pretty good about it as the handle is a much thinner metal than the leg that it is welded onto.


I then tilted the table 90 degrees, and welded the bottom part of the handles.  So, this is a vertical weld, where gravity really comes into play.  After botching the first handle by going bottom to top, I tried this one going from top to bottom.  A welding manual said that it's easier but that there isn't as much penetration.  Since the other handle got eaten up by the weld, i figured I should just keep all the settings the same & it would work out OK. 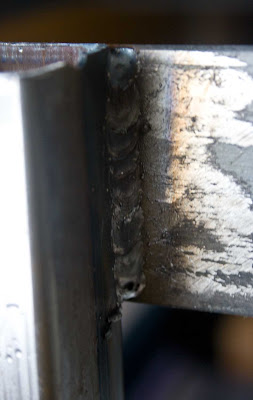 Not too bad.  I started & stopped several times to 'freeze' the weld puddle to avoid too much heat like the previous error.

Today, I cut a sheet of aluminum (with a 150+ tooth circular saw blade that said "do not use on metal"... maybe I should have read the fine print before buying it)  and fit it into the bottom.  Now I've got a nice shelf for all my welding stuff.  And yes, I do remove the cardboard boxes before welding. I also I move the whole table outside a bit before starting.  Thus the handles & the casters on the other side.  Also note the fire extinguisher on the left.

The next project is going to be to make supports for the fire resistant cloth that I bought as a welding screen, to keep the arc's view out of neighbors' eyes.   It should also work well as a wind breaker, and help me make better welds with my MIG.
Posted by TMC at 10:37 PM

Usually when you look back on a project years later, you see the flaws.  Not so with my welding table.  I could see the flaws *as I was creating it*.  I'm still very proud of it.  I learned a whole lot about my Lincoln MIG welder, as well as constructing a table. 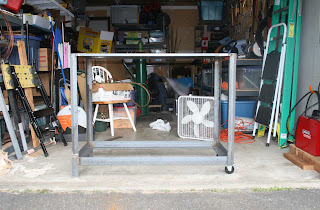 As you can see in this image, the table is desperately needed, to make room for a lot of equipment in an already over-filled garage. 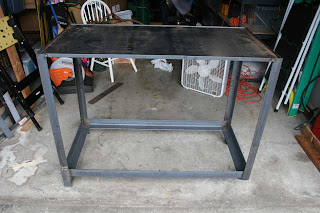 I put casters on one side.  These were the only casters at Pacific Industrial Supply that I could find with a locking mechanism on them.    The narrowest part of the base was 2 1/2 inches.  So, without really thinking (they were getting ready to close) I picked up 2 1/2 inch angle bar for the bottom.  It was very thick, 3/16" (looks more like 1.4").  I could have bolted the casters on, but as I was in a rush, I just welded them on.


Remember that phrase "Measure twice, cut once"? Here's why: 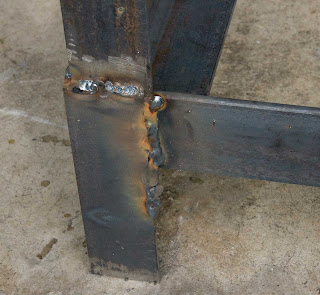 I cut the angle bar in the wrong spot for one of the legs.  Fortunately, I had more, and tacked on a little at the end.  On the plus side, the error that I made, actually made it possible for me to have the table 2" higher, putting it at 3'2", an ideal height for me to work on most projects.  Now, if I had just planned that from the beginning.... This shot also highlights one of my worst welds ever made with my MIG.  Besides the fact that I should have cleaned the metal a LOT more before welding as I'm using gas shielding and not flux-core, the biggest reason I saw bubbles in my welds was due to the fact that it was really windy out.  Even after I increased the gas flow, I still got a few bad welds.  Oh yea, I think this image also showcases a really bad vertical weld.

Just to prove I'm not a total fuck-up, here's a shot of one of the better welds on the table (the one in front).  I'm willing to bet that a pro weldor (i.e. my Dad) would point out some of it's flaws, but it had good penetration, and no bubbles (the two spots are from the wire feed coating that were not brushed off yet) 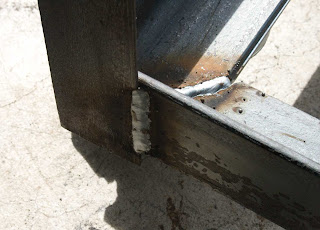 The one thing I learned during this project was this:  Kerf & metal thickness NEED TO BE TAKEN INTO CONSIDERATION WHEN YOU FABRICATE!!!

Basic stuff for the experienced weldor, I'm sure.  The good news was that the table-top was a bit longer than I measured during my rush at Pacific Industrial Supply  (yup, that mistake again).  The metal thicknesses and some other creative tricks actually made it possible for me to complete the project without having to go back to pick up more material.

At least it's (mostly) level.  Hopefully my projects made on it will turn out better than it did itself. :)
Posted by TMC at 7:10 PM