Ravenna and I found a dead beetle in our backyard. I put it in a jar & photographed it. Below is the image, with a couple of different styles applied to it> 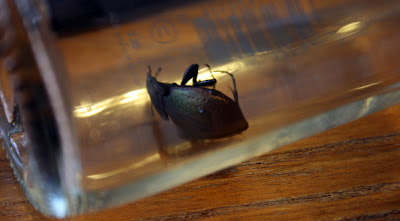 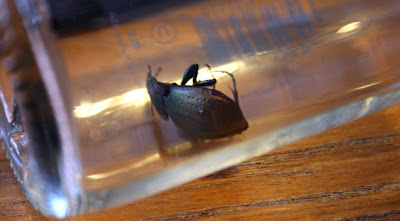 Sepia tone. Because the image already looks creepy, might as well go for broke. 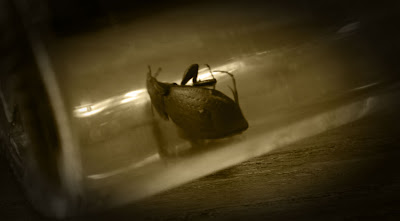 These images make me realize that I really need to spend a bit more time in Photoshop & learn some new techniques. Nothing I did here was new. I pretty much used similar techniques back in 1998.
Posted by TMC at 7:25 PM

I have NO idea if any of the information below is factual or not. I am simply putting it up here for a matter of record, as this page has been taken down REPEATEDLY over the last few days. Will lawyers come after me for posting this text as a matter or record? I do not make any statement to it's truth or untruth. I simply want it up for others to confirm or deny it's allegations.

Stay Tuned. All text beyond the line below is NOT MY OWN.


REPOST BY ANOTHER USER BECAUSE THE ORIGINAL WAS HIJACKED: I AM NOT THE ORIGINAL ADMIN/CREATOR OF THIS GROUP, BUT I FEEL IT DESERVES TO BE PUT BACK.

IF THIS ONE GETS HACKED/REMOVED, THEN SOMEONE PLEASE CREATE ANOTHER, AND SO ON.

YOU CAN'T STOP THE SIGNAL.

AND I WILL OFFER NO RETRACTIONS AND NO APOLOGIES.

LIVE WITH IT, WEINERS...


NOTE FOR THE LEGAL VULTURES:

YEAH, GUILT BY ASSOCIATION. MY CHOICE, MY OPINION.

BELOW IS THE ORIGINAL GROUP DESCRIPTION:

As the creator of the original "Don't Drink Hate. BOYCOTT ROCKSTAR" group, I've created this group to publish a public apology and retraction as forced by the law firm representing ROCKSTAR*.

But before I do, let me explain what led to this.

One month ago, my friend showed me a little article filled with quotations from Michael Savage Weiner and his son Russell Weiner. I was utterly disgusted. Then I read that Russell Weiner was the CEO of Rockstar* and his mom Janet Weiner was CFO . After more readings, I made a PERSONAL CHOICE to BOYCOTT all ROCKSTAR* products.

I made a group to let others know and be able to make a similar choice if they wanted; the group was formed and it quickly grew to over 12,000 members. In it, we put together a list of quotations from Michael Savage Weiner as well as his son that we strongly did not agree with.

We also put commonly known information such as the fact that they co-founded the extremely conservative Paul Revere society, which openly calls for actions such as “Eliminate bilingual education in all states" and "Traditional Marriage." More easily proven information was included as well.

Then, on May 27th, I woke up unable to log into my personal Facebook account. It was disabled. This is my new account; I lost all my photos, friends and priceless memories. I sent multiple e-mails to Facebook without any response. And then upon inquiring, I found out that the facebook group was suddenly taken down without my or any of the administrators' knowledge (As an update, as of yesterday, after my friend's hard work with connections at Facebook they suddenly reinstated my old account. However, as happy as I am, I find this very troubling on many levels in terms, especially because I still have not yet received a satisfactory explanation.)

A few days later, I received a lawsuit threat from the law offices of Glaser, Weil, Fink, Jacobs, Howard & Shapiro, LLP -- Robert Shapiro was one of the attorneys who successfully defended OJ Simpson.

Now here I am.

And I've been forced to make this apology.

I've been forced to make "an immediate public retraction..." and "apologize for the business libel you committed against ROCKSTAR."

I've been "advised that ROCKSTAR will pursue all necessary legal action to redress the violations of its rights, including, without limitation, an action for general, special and exemplary damages and equitable relief."

Let this group and this statement stand as evidence of an apology. As Facebook disabled the original group without my knowledge, I suggest you contact them if you want me to be able to message all the members of the original group:

I, Charles C. C. Tsai, hereby apologize for the alleged business libel that I committed against ROCKSTAR* and publicly retract, through Facebook's own unexplained deletion, the statements from the original Facebook group.

Now, I personally also apologize for the following:

I apologize for having an opinion.

I apologize that I created a group as a means to explore my FREEDOM OF SPEECH.

I apologize that the over 12,000+ individuals in that group were SILENCED WITHOUT EXPLANATION.

I apologize for STANDING UP for my communities and the communities that I consider myself an ally to.

I apologize for being DISGUSTED by the statements, beliefs, thoughts and actions of two INDIVIDUALS: ROCKSTAR* CEO Russell Weiner and his father, Michael Savage Weiner. Let me repeat, two INDIVIDUALS.

I apologize that you feel the need to THREATEN and SILENCE individuals & organizations that you know are POWERLESS in comparison to your various forms of capital.

I apologize that you seem to be confused by the semantics of the word "co-founder" in the sense that Michael Savage Weiner and his wife Janet Weiner IRREFUTABLY CO-CREATED / CO-INVENTED / CO-FOUNDED the ROCKSTAR drink alongside current CEO RUSSELL WEINER.

"I was very fortunate to have been raised by two of the leading herbalists in the world, Dr. and Mrs. MICHAEL WEINER, Ph.D. ... From my earliest walking days, I remember exploring the jungles of the South Pacific on expeditions WITH MY PARENTS. ... MY FAMILY HAS taken that spirit and experience - their lifetime journey - and DEVELOPED the most complete, most unique, most powerful, and most honest energy beverage ever created: ROCKSTAR." - CEO RUSSELL GOLDENCLOUD WEINER

After reading the above, I apologize that you, Michael Weiner Savage, feel the need to LIE, as you told the SF Chronicle in May 2009 that "I had NOTHING to do with the founding or CREATION of Rockstar."

I apologize that legal threats WILL NOT FORCE me into SUBMISSION.

I apologize that I will not be silenced.

I apologize that the incredibly smart, strong willed and amazing individuals and communities that dislike your CEO Russell Weiner, his dad Michael Savage Weiner and his mom CFO Janet Weiner will NOT go quietly into the night and will too NOT BE SILENCED.

I apologize that I will, WITHOUT ANY DOUBT, continue to BOYCOTT ROCKSTAR* as it is MY OWN PERSONAL CHOICE TO DO SO.

And, lastly, I apologize for any additional semantically puzzling words this note may have presented. Please realize that I have sensitively taken this into consideration through capitalization and repetition.

For more information to further understand the context of this apology:

"the truth about rockstar"
http://www.thetruthaboutrockstar.com/

"the guardian on michael savage" - the guardian
http://www.guardian.co.uk/politics/blog/2009/may/06/michael-white-michael-savage

*DISCLAIMER: This group is in no way, shape or form calling for a boycott on ROCKSTAR, the original group name is being used for identification purposes only. The ROCKSTAR* trade name, company, its employees and beyond are not affiliated with this group. Everything said/written is either my OPINION or straight quotations from other individuals apart of, represent, or are family members to the CEO of ROCKSTAR.
Posted by TMC at 10:13 PM