We heard about a friend who was having frozen pizza from famous locations across the country mailed to him. Intriguing. I looked into it, and we found that it was prohibitively expensive, for the quantity anyway. So, we moved forward with a new plan: get a list of the most recommended provisioners of pizza in the Pacific Northwest. Well, the greater Seattle area, anyway. First up:

When I first came to Seattle in 1999, this was the place my friends said was unique to the city. It’s solid. A perennial favorite. One of our friends turned me onto the bacon pesto breadsticks for this review, so let’s start with those:

These are salty, savory, tasty. A cut above with a variety of evolving flavors than the typical breadstick. My wife pointed out that these are cheater sticks: pizza dough cut into sticks. She’s not wrong, but I don’t care. They go well with ranch and washed down with Hunniwater Kindness Green Apple Lime.
Now onto the pizza itself. Here are the remains of our first meal: 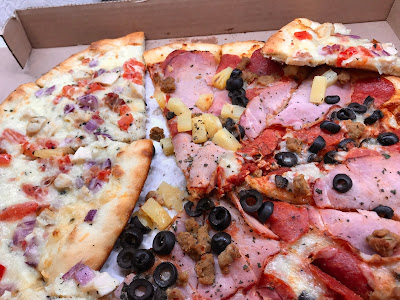 On the left is their Yeti; Chicken, Bacon, Tomato, Red Onion, Parmesan with an Alfredo Sauce Base, They are essentially savory bread sticks pre-dipped. They go great with ranch. Some people with delicate palates would prefer something more subtle. I have admittedly simpler tastes. I like primary and bold color combinations. I like salt and juicy goodness, digestive tract be damned later that evening, no matter how many lactaids I take. This fits that bill.

On the right is their Puget Pounder. Original ingredients are Pepperoni, Canadian bacon, Italian Sausage, Mushroom, Black Olive. We subbed out the mushrooms (which, let's be honest, have such a subtle taste they might as well not even be on food. They look like cartoon dog noses anyway) with pineapple, as per my daughter's request. They covered half with the Pineapple. I can't tell if that was a mistake, or a suggestion. I had slices of both. The sauce, almost squeaky mozz and mid-crust reminds me of Pizza Baron in Portland and an unnamed parlor on the way to Mt Hood. (Theirs are a little thinner, with more corn meal on the bottom, and big bubbles showcasing exposed sauce with all the little triangular cracks on the edge. I miss both.) I say mid crust, where the cheese skates a little on the sauce when bitten. This is tasting nostalgia. I don't care how many people are going to talk about the merits of New York vs Chicago vs Detroit pizza. THIS is the heart of Pacific NW pizza. This essence. This experience.
Nostalgia is a powerful drug. It reminds us of sledding and 3-1 snowball fights with the whole family pitted against Dad, and he still would get the upper hand, throwing into the branches of the trees where we took shelter, raining all their snow down upon us. Heading back to the truck, socks wet and feet frozen, exhausted to a pizza parlor where the stucco ceiling stalactites hung at least three feet down, like a battery of swords of Damocles, while we ate the best thing in all of creation.

Zeek's is a good starting point for this review. It's easy to ignore it when you are busy playing on your Nintendo Switch, and pounding a beer or a bong. But pay attention to it a little bit, and it will let you know that you live on stolen land, among the trees. And you want to make peace with all that is here to truly belong.